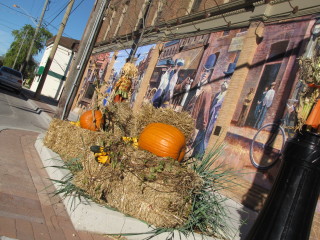 Located throughout our downtown core are several murals, created by renowned artists to present a snapshot of our past.

Our Community; This mural representing the past, present and the future of the area is located on the south wall of the Eddie Bush Arena.  It begins with an early scene by Bill Hartman showing Petun Indians looking over what would become Collingwood.  The next image is by Janie Cooper Wilson, showing the difficult task of clearing the land. During the early 1800’s many fugitive slaves settled here and these families become an integral part of the community. Wilhelmina Wildman’s panel illustrates the early days of the commercial fishing industry. Gordon Kemp’s mural is of the architecturally unique grain depot, built in 1929 as a link from the country to the community. The mural by Shirley Farmer shows the recreational use of the area.

Busy Wagons; Located on the northwest corner of Hurontario and Second streets, this John Hood mural presents the colour and activity of the early 1900’s.

Ski Train; Located on the north wall of the CIBC, this mural was created by ceramic artist, Richard Gill. This unique three-dimensional artwork illustrates the early days of the ski and tourist industry. The mural shows the Craigleith Station as skiers arrive by train and are taken to the ski hills by horse drawn sleighs.

The Shipbuilding Industry was the lifeline of Collingwood for almost one hundred years. Beverly Smith’s Heading Dockside is located on the east wall of 28 Huron Street. This mural gives a whimsical look at the men and women heading to work at the shipyard.  Located on the side of  the former Mountain View Hotel, Side Launch captured the unique style of a side launch and is the work of John Hood and Alexandra Hood.  It is currently in storage and will be relocated at a future date.