Ken Templeman, our friendly neighbourhood Town Crier opened the doors of Templeman’s Hairstyling in Collingwood Downtown in 1991 and has been Collingwood’s Town Crier since 1996. 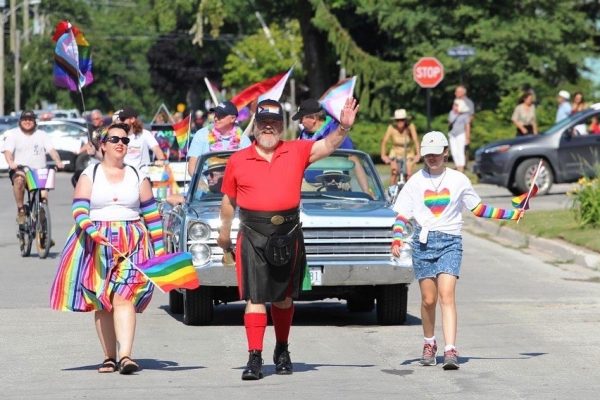 As a child, Ken would often take the bus after school to his uncle’s barbershop, enjoy a snack and then spend the evening running errands or helping to clean up the shop.  “I was just a kid but that’s where it all began for me.” recalls Ken.  “My uncle who had also purchased four barber schools was the person who influenced me to get into the trade.  After getting licensed as both a barber and a hairstylist, I’ve been working this business since 1973, that’s over 48 years.”

Back in 1996 the Collingwood Downtown BIA (Business Improvement Association) was planning the Santa Claus Parade and the Candlelight Vigil and someone on the BIA Board suggested that Ken, who was a Parade Marshall start the vigil and lead the parade.   Not having anything appropriate to wear, Lois Woolnough who owned a shop called Balloon Expressions lent Ken a purple velvet costume adorned with lace and Cam Trott, who owns Trott’s Sports Excellence tossed in a pair of baseball socks to complete the look.  On the evening of the candlelit vigil it was pouring rain and Ken got soaked through to the skin. When he went to change into dry clothing, he found that his t-shirt, sox and undergarments were all dyed purple.

Fun fact:  Today, Ken’s uniforms are made by his wife Marianne Templeman who is a very accomplished seamstress.

Today, Ken kicks off about 35 events a year including business grand openings, weddings, graduations and celebrations of all kind.  This year with great pride and for the first time in history he was honoured to start Collingwood Pride Parade.

If you have an upcoming celebration and want to make it a really special occasion, or if you need a little update to your look, you can find Ken at Templeman’s Hairstyling at 227 Hurontario St. in Collingwood Downtown, or give him a shout at 705.444.0389.