Nick’s Unisex Hairstyling has been in business for 43 years in Collingwood Downtown serving the families of our community.  They offer family hairstyling, customized colouring, perms and aesthetics including waxing, manicures and pedicures and lash and brow tinting. 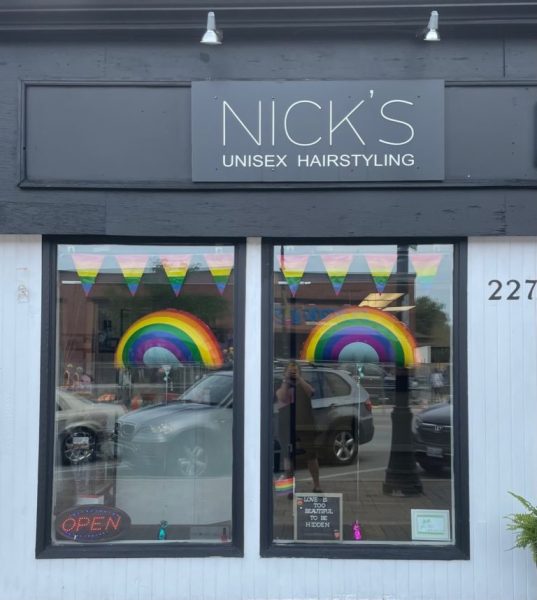 Father and daughter team Nick Pisani and Krystina Cunningham work side by side each day in this busy salon with the doors opening as early as 6AM.  “It’s a long time tradition that I started back when my salon was located up the street closer to the Shipyards.  Shift change was at 6AM for the workers at the Shipyards so it made sense to be to be open early to provide a convenient service to folks just coming off shift.” recalls Nick.

Nick was born in the small town of Serra San Bruno in the Calabria region of Italy, was raised in Orillia and graduated from Bruno’s School of Hair Design in Toronto before making Collingwood his home town.  Nick’s daughter Krystina was pretty much raised in the salon and it all started for her when she was just 3 years old.  “I would stand on a little orange stool and take the rollers out of ladies hair. I love working with my dad 99% of the time.  I just know how he works and vice-versa.” laughs Krystina.

“You become such a people person when you run a business like this.  You really get to know your customers and sometimes you form a life-long bond with them.  In this business you hear a lot of things that can be confidential in nature and you can’t dive into the gossip.  You have to treat your customers with respect and you’ve got to be accommodating.  For example, we love that we have an accessible parking spot right outside for our customers who are elderly and we go out of our way in the winter to make sure that the snow is cleared so that they can get out of their vehicles and into the shop easily and safely.” says Nick.

Fun fact:  When Nick needs his hair done, there’s no one he trusts more with a pair of scissors than his own daughter.

Being located in the downtown core has its conveniences.  Nick and Krystina are always changing up their window décor in the shop to go along with the different festivals and events organized by the Collingwood Downtown BIA.  “We just hop across the street to U-pick Parties, Roxann has everything we need for that. Or if we didn’t pack a lunch we just zip up to Pita Pit to grab something quick to go.  Supporting your neighbours in a small town is important, because they’re the ones that are going to support you right back.” says Nick.

If you’re in need of a snip or two, want to update your look, or pamper yourself a bit with a manicure or pedicure, give Nick’s a call at 705.445.9522 to get set up with an appointment.  You can find Nick’s Unisex Hairstyling at 227 Hurontario Street and follow them on facebook at www.facebook.com/NicksUnisexHairstyling/